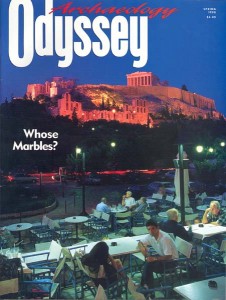 Upon hearing that photographer Giovanni Lattanzi and I were planning to visit the Greek isle of Corfu, an archaeologist friend of ours exclaimed, “Oh, good! You’ll be visiting Butrint.”

I had already begun imagining a picnic on a remote, sunlit Greek islet, surrounded only by a few scattered stones and perhaps some goats, when our friend added soberly: “It’s in Albania.”

Albania? Just last year, Albania was engulfed in a chaotic and bloody civil war. Pictures of armed civilians clashing with government forces and helicopters airlifting visitors to safety filled the evening news. During the day, anarchy reigned on the streets of the capital, Tirana. At night, those same streets were eerily deserted, the silence punctuated by rounds of gunfire.

Undeterred, we scoured our maps in search of Butrint. We finally learned that Butrint’s remains sit on a bluff in the highlands of southern Albania, only six miles from Corfu.