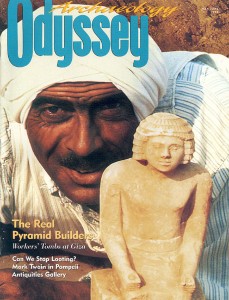 Last year, on the Sunday between Christmas and New Year’s, the lead story on the front page of The Boston Globe was not about President Clinton’s impending impeachment trial in the Senate, nor about Saddam Hussein’s effort to shoot down American planes over the no-fly zone in northern Iraq, but about the Boston Museum of Fine Arts, known locally as the MFA, which, according to the newspaper, was buying looted antiquities.

Two days earlier, the author of the article, Globe reporter Walter V. Robinson, received the first Public Service Award of the Archaeological Institute of America (AIA) for earlier exposés of the MFA and other museums, charging unethical, if not illegal, trading in looted antiquities. The AIA citation noted the “long-standing conflicts between countries rich in archaeological heritage and U.S. museums.”

Truth to tell, I’m kinda glad the MFA bought the stuff. At least that way I’ll be able to see it.