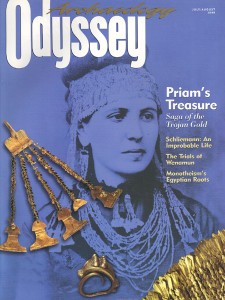 A lush, palm tree-lined oasis in the middle of the Syrian desert, the city of Palmyra has been attracting visitors for almost three millennia.

From 1900 B.C. to 100 B.C., Palmyra served as a stopover for caravans making their way from the Persian Gulf to the Mediterranean. After the Roman invasion of Syria in 100 B.C., it became a prosperous Roman colony; merchants from all over the Eastern empire traveled there to trade in spices, perfume, silks, glassware and objets d’art.

The city’s floruit continued until 270 A.D., when the brilliant and powerful Syrian Queen Zenobia spearheaded a disastrous insurrection against Rome. No match for the mighty legions of the Emperor Aurelian, Zenobia’s armies were crushed; the Syrian queen was arrested and Palmyra was stripped of its riches and transformed into a drab imperial garrison.

Almost two square miles of first- and second-century A.D. Palmyra have now been excavated, making it possible for archaeology buffs to see everything from the town temple to the town baths. Some of downtown Palmyra’s most celebrated sights include a massive monumental arch, a spectacular colonnaded main street and the Great Temple of Bel, the Zeus of the Palmyrene pantheon (Bel derives from the ancient Babylonian god Böl, who is related to the Canaanite Baal).