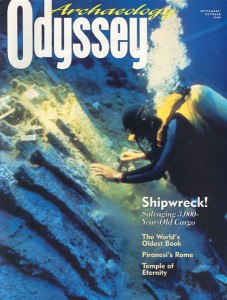 You can read lots of stories about looting—how terrible it is—but seldom do the stories end with any practical solutions. This one will be different.

The place is in Jordan, on the southeastern shore of the Dead Sea. One would hardly expect to find major archaeological remains at the lowest spot on earth (nearly 1,300 feet below sea level) in as inhospitable a climate as one is likely to encounter—blazingly hot, practically waterless and frighteningly isolated. Contrary to what you might suppose, however, the area was quite heavily populated in several historical periods. We know this primarily because when people died they were buried, sometimes in huge cemeteries. Because of the climate, the bodies are often extraordinarily well preserved; hair, skin and even internal organs have survived.

These burials are from Early Bronze Age I (c. 3300–3000 B.C.), the Middle Bronze Age (c. 2300–1550 B.C.), the Roman period (37 B.C.–324 A.D.), the Byzantine period (fourth to seventh centuries A.D.) and the medieval period. (Recently, some tombstones in this region have been purchased by the collector Shlomo Moussaieff; see “Ransomed for Posterity,” Field Notes) All together there are tens of thousands of graves. In addition to grave goods such as pottery and jewelry, some architecture where the dead once lived is still in the ground.