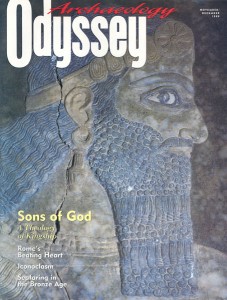 And the letters keep pouring in!

In “Ransomed for Posterity!” Field Notes, AO 02:04, we ran a story about a group of Jewish gravestones dating from the fourth to sixth century A.D. These stones were looted from cemeteries in Jordan near the southern end of the Dead Sea and later purchased on the market—in effect, ransomed—by London collector Shlomo Moussaieff, who allowed us to publish, for the first time, pictures of the objects.

Sad to say, one of the pictures in that section (the stone depicted in the first photo) was flopped. To read the inscription (and the headline above), you would have to hold it up to a mirror.

We noticed the error on receiving the issue from our printer—as did scores of readers. The mistake is all the more egregious because the stones tell an important story: Their inscriptions include precise dates indicating that this Jewish community followed a calendar different from that used in Rabbinical Judaism (the form of Judaism that has come down to us today). The observance of Passover, for instance, varied by as much as a month between this Dead Sea community and Rabbinical Jews. Thus we learn that at least one community of non-Rabbinical Jews was living in Palestine as late as the sixth century.

So here’s the photo again, with the stone’s shofar (ram’s horn) and machtah (incense shovel) in their rightful places—and with the lovely words Shalom al Yisrael Shalom proceeding as they should, from right to left on the last line of the inscription.—Ed.