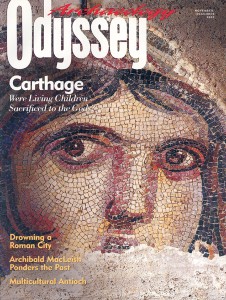 Were it not for a few classical accounts, scholars would probably not attribute the burials in the Carthage Tophet to child sacrifice. Some of the more sensational stories, such as those related by the first-century B.C. historian Diodorus Siculus, have been picked up in modern times and passed off as the entire truth. In the 19th century, for instance, Gustave Flaubert described Punic child sacrifices in his novel ; he had no evidence at all, except for the classical sources.

What if, however, the classical sources are unreliable? Indeed, what if all the evidence regarding the burials—either from literary sources or archaeological excavations—is unreliable or inconclusive?

Here is Diodorus’s account of how the Carthaginians sacrificed their children: “There was in their city a bronze image of Cronus, extending its hands, palms up and sloping toward the ground, so that each of the children when placed thereon rolled down and fell into a sort of gaping pit filled with fire” (Library of History 20.6–7).

This is the stuff of myth, not history. Diodorus, who was from Sicily, was probably mixing up stories about Carthage with ancient Sicilian myths—specifically the myth of the great bronze bull, built for the Sicilian tyrant Phalaris, in which the king’s enemies were roasted alive.