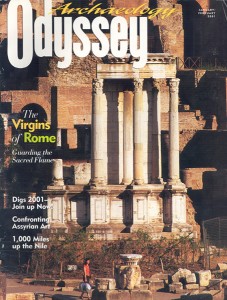 The Man Who Would Be King

Or, A Big Fish in a Small Pond?

The wildly wealthy governor Zed-Khonsu-ef-’ankh ruled Egypt’s remote Bahariya Oasis 2,600 years ago. When he died, he was buried in a manner normally reserved for pharaohs: He was mummified and placed in an expensive, imported, human-shaped sarcophagus. The sarcophagus was then housed in an elaborate painted tomb watched over by the gods Osiris, Anubis and Isis.

Egyptian archaeologists recently found the governor’s tomb in a labyrinth of sandstone caverns near the oasis’s central town, el-Bawiti, 250 miles southwest of Cairo. Just a year earlier, in October 1999, the Bahariya Oasis had yielded one of the most sensational finds ever: more than a hundred Roman-period mummies, many with gilded, gleaming faces and breastplates.a

The discovery of Zed-Khonsu-ef-’ankh’s tomb ends an archaeological treasure hunt that began in 1938, when the Egyptian archaeologist Ahmed Fakhry found three tombs beneath modern mudbrick houses on a ridge just outside el-Bawiti. These tombs contained inscriptions identifying them as belonging to one Ped’ashtar, his grandson Thaty, and Thaty’s wife (and sister) Ta-Nefert-Bastet. Ped’ashtar, we now know, was also the grandfather of Zed-Khonsu-ef-’ankh.

“I am convinced that the tombs of this family of priests and governors of Bahariya are grouped in this ridge,” Fakhry wrote. “If the site is properly excavated, more inscribed tombs of several generations of men and women will be found.”