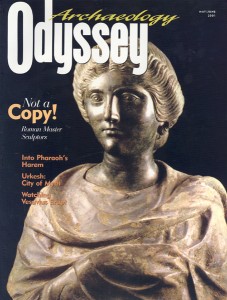 The thousands of mid-second-millennium B.C. documents unearthed at Boghazkoy, Turkey, the site of the Hittite capital of Hattusha, include several collections of myths dealing with ancient heroes and gods. In the most important group of these myths, however, the heroes and gods are not Hittite; they are Hurrian, and their stories are set not in Anatolia but in Syro-Mesopotamia, where Hurrian-speaking people lived. These myths, the so-called Kumarbi Cycle, are Hittite translations of Hurrian stories. Some of them are even inscribed on bilingual tablets in both Hittite and Hurrian.

The Kumarbi Cycle consists of stories about one of the principal Hurrian gods, Kumarbi, and his family. (The Hittites took Kumarbi’s son Teshub, the storm god, as their main god.)a Kumarbi rules over a city named Urkesh. In one story, Kumarbi’s son Silver is sent to live with his mother in the mountainous countryside, where another child, an orphan, torments him by telling him that he has been abandoned by his father and that he, too, is just an “orphan”: