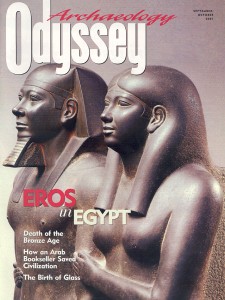 In museum vitrines all over the world, we see beautiful objects labeled “Roman Glass.” This is misleading, for it is unlikely that any ancient Roman became a glassmaker.

Nor were the Greeks more knowledgeable about the art of glassmaking. In 426 B.C.E. the playwright Aristophanes reported the astonishment of Greek ambassadors to the Persian court who were served in bowls made of a strange translucent material for which they had no name. Yet the art of glassmaking was already 2,000 years old.

Glassmaking was born in ancient Mesopotamia as an amalgamation of two independent technologies, the invention of glazes and of reverberatory furnaces (which produce high temperatures by radiating heat from the furnace’s roof). The Sumerians had discovered the formula for glazing, a process of vitrification in which a thin film of glass forms on another surface. But they could not produce glass in bulk, because their pottery furnaces could not sustain the necessary temperature of over 2000 degrees. In the mountains of northern Mesopotamia, however, Aramite and Hurrian smiths invented such high-temperature furnaces to smelt iron. When northern Mesopotamia and Sumer were conquered by the Aramite Sargon I around the 24th century B.C.E., the two technologies married and the art of glassmaking was born.

Glassmaking was invented only once in human history. Its secrets traveled from Akkadia to Canaan, following the path of the biblical Abraham. For over 2,000 years, the art languished in the Near East until Judaic practitioners brought it to Europe following the Roman conquest.