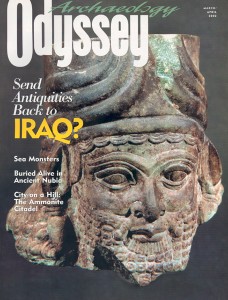 Well before yo-yo mania struck in the 1930s, and even before 18th-century French audiences watched Figaro nervously playing with a toy that “dispels the fatigue of thinking,” the ancient Greeks were using metal, wooden and clay disks to “skin the cat” and “shoot the moon.”

Yo-yo’s like the terracotta example above, dating to about 460 B.C., have been found in archaeological excavations throughout Greece. Images of people playing with yo-yo’s were also painted on vases and plates, such as the mid-fifth-century B.C. plate above.

Children in ancient Greece and Rome played with a variety of toys—including tops, hoops, marionettes, rattles and the so-called Trojan horse toys, or miniature horses with an inner cavity for storing toy soldiers. A game called astragali in Greek and tali in Latin, which involved tossing the anklebones (astragals) of a sheep or a cow, was originally devised as a way to predict the future; eventually, it became a game of skill played mostly by young girls.