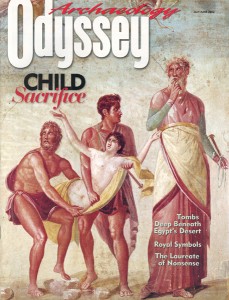 In May, 2001, a construction crew was ready to dig the foundation of a new shopping plaza in the Italian town of Nola, 7 miles southeast of Mount Vesuvius. Following standard procedure, the builders arranged for a preliminary survey to be conducted by archaeologists, who drilled deep beneath the surface in search of ancient remains.

Which, of course, they found. Some 21 feet below ground, they came across traces of a kiln used to smelt metals. In the ensuing excavations, the archaeologists have so far uncovered two elongated, horseshoe-shaped huts from the best-preserved Bronze Age village ever discovered in Italy.

Between 1880 B.C. and 1680 B.C., Mount Vesuvius erupted, covering the prehistoric village with mud, pumice and volcanic ash. (The dates have been determined by carbon-14 analysis of skeletal and pottery remains.) Paradoxically, this destructive explosion preserved many artifacts under the hardened volcanic material. From these remains, archaeologists have even been able to recreate the villages’ huts; for as the timber and thatch of the buildings decayed away, hollow impressions (or “molds”) were left in the volcanic casing. (Similarly, the photo above shows a mold for a sheath of grain.)