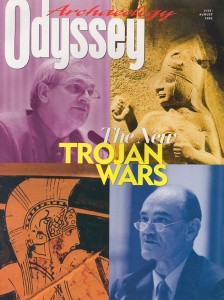 Pausanias, regent of Sparta, was one of Greece’s greatest heroes. He led the Greek forces in the decisive defeat of the massive Persian invasion at Plataea in 479 B.C. It was this splendid victory that ushered in what has become known as the Classical Age of Greek culture. Had it not been for Pausanias and his achievements, it could be argued, there would have been no Pericles, no Parthenon and no Plato.

But just a few years after his victory, Pausanias was found to be betraying Greece to the very Persians over whom he had triumphed. The Spartans devised a terrible punishment for him. They bricked him up inside one of their principal temples, the so-called Bronze House of Athena, and starved him to death. It is said that Pausanias’s own mother laid the first brick.

What happened in between his victory and his death is a sad story. In the years after his victory at Plataea, Pausanias and the Greek forces carried the battle to the Persians. Success soon went to his head. He fell into madness, and his behavior became erratic. Treachery aside, he acted like a tyrant in his treatment of the freedom-loving Greeks under his command. But his troubles really began when he fell in love while in Byzantium (modern Istanbul), at that time the base of his operations.