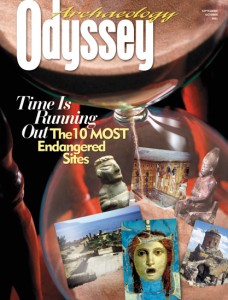 Playing a drum and aulos (an ancient Greek double-pipe), two female musicians take passage on a “ship of the desert” in this first-century A.D. Syrian relief.

Domesticated camels appeared in Mesopotamia by the middle of the second millennium B.C. The dromedary (a single-humped camel) was originally domesticated in southeastern Arabia, perhaps as early as the third millennium B.C. Around the same time, the Bactrian (double-humped) camel, which was mistakenly thought to be native to Bactria, in northern Afghanistan, was being domesticated in eastern Persia. The Sumerian word for the Bactrian camel literally means “wild bull from the foreign mountains.”

Once domesticated, camels greatly facilitated travel over the rough, arid terrain of the Near East and North Africa. Carrying up to 1,000 pounds on their backs, camels can walk some 25 to 30 miles in a day and go for weeks without drinking water. A thick lining in their mouths enables them to eat almost anything digestible, even thorny bushes—and a special, nearly transparent eyelid allows them to see while protecting their eyes from blowing sand. Camels also provide their owners with milk (females can produce more than a gallon a day for up to 18 months after giving birth) and fuel (dried dung).