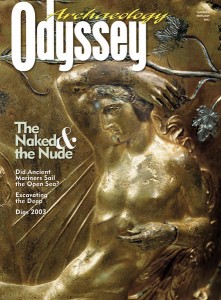 “The Mediterranean is a passionate collector,” writes European scholar Predrag Matvejevicá in Mediterranean: A Cultural Landscape (1999). Indeed, over the past half-century, essentially since the invention of the aqualung in the 1940s, divers have discovered the remains of well over 1,200 ancient shipwrecks.a

Most of these wrecks date to Roman times (200 B.C.–300 A.D.), though examples have been found from nearly every major period of antiquity. Roman-period ships tended to carry amphoras full of olive oil, wine or fish sauce. But marine archaeologists have also found other cargoes: raw metal (such as copper and tin ox-hide ingots), bronze and iron weapons, precious metals, jewelry, stone statues, building materials, musical instruments, religious objects, games, tools, ostrich eggshells and even one of the world’s oldest books (see photo of hinged book).1