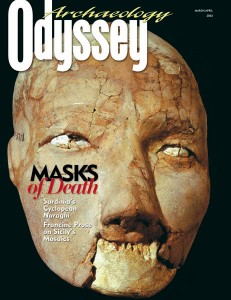 One of the Sea Peoples mentioned in late-second-millennium B.C. Egyptian texts (as well as others) is called the Shardana. Like the Philistines, the Shardana settled in the Levant during a time of great instability, when numerous powerful Bronze Age civilizations were collapsing.a

But where did they come from?

Scholars have long recognized the similarity in the names “Shardana” and “Sardinia.” Were the Shardana, then, displaced Sardinians who made their way to the Levantine coast? Although this is an intriguing possibility, there simply has been no evidence to support the claim—until our excavations at el-Ahwat in north-central Israel.

In 1992, soon after beginning excavations, we made some perplexing discoveries. We uncovered a 2,000-foot-long perimeter wall consisting of about 200,000 cubic feet of stone. Building this wall required an extraordinary investment of time and energy, yet the 8-acre settlement enclosed by the wall had only been inhabited a short time, from about 1220 B.C. to 1170 B.C. The wall was also different from other Canaanite walls: It tended to meander, changing directions for no apparent reason; and the northern road into the city descended as it approached the city gate, whereas all other walled cities in the region required visitors to mount a ramp to gain entrance.