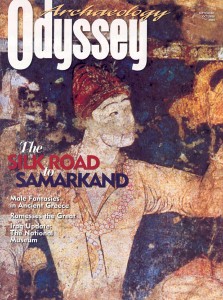 You barely notice him in the cacophony of the modern city. Austere, stiffly formal, he is either too large or too small, slightly ridiculous amid Cairo’s dissonant traffic.

The 31-foot-tall, 90-ton granite statue of the Egyptian pharaoh Ramesses II (1279–1213 B.C.) was found in the 1920s in the ancient religious capital of Memphis, 15 miles south of Cairo. In 1954, after Gamal Abdel Nasser assumed control of the newly independent state of Egypt, the statue was cut into three parts, loaded onto trucks, transported to Cairo and re-erected in front of the Cairo railroad station, as a symbol of resurgent Egyptian nationalism. Ever since, Ramesses 044has been a familiar landmark—the first thing glimpsed by weary travelers about to immerse themselves into the metropolitan commotion.

Part of what makes Cairo’s humble colossus seem so incongruous is that the modern city is, indeed, a “commotion,” a confluence of motion, whereas Ramesses’ original context, the ancient past, is a condensation of motion. Relics like Ramesses have nothing to do with the bustling uncertainty of modern life; they are quiet and still, contained by their antiquity. They require the isolation of a landscape, or the flooding darkness, or other ruins like themselves.