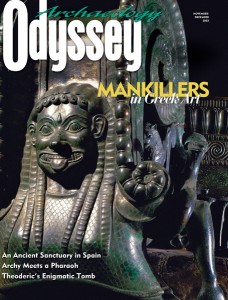 A magnificent theater suddenly comes into view on your left as you approach the town of Sutri, which is perched on a high promontory 30 miles north of Rome. Unlike most hillside structures, which simply make use of the natural slope, Sutri’s theater was entirely scooped out of the soft volcanic tuff, like a pumpkin.

Just who built this impressive structure, and when, remains unclear. Until recently, it was assumed that the theater dates to the fifth or fourth century B.C., when this part of Italy was controlled by the Etruscans.

The structure, indeed, has tantalizing Etruscan elements. Not far from the Sutri theater, for example, the Etruscans constructed burial chambers and altars by hollowing them out of the soft rock. And some of the theater’s doorways are capped by T-shaped openings that once held wooden cross beams—a typically Etruscan design. (Leather curtains were likely suspended from the beams.)

Today, however, most archaeologists attribute the theater’s construction to the Romans, who conquered Sutri, along with most of Etruria, in the late fourth century B.C. As is often the case in the clash of civilizations, the conquerors find that they, paradoxically, are also the conquered—and the Romans who came to live in the former Etruscan cities began to take on Etruscan ways, a fusion of cultures that may account for the architecture of Sutri’s theater.