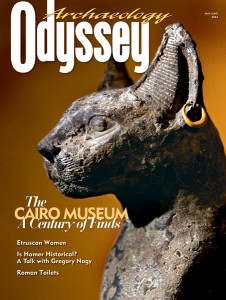 The man in this 2-foot-tall, first-millennium B.C. Syrian relief is about to fertilize a female date palm by smearing pollen from a male date palm over its flowers. Our farmer hopes to create lots of little date palms, from which he will cull the female trees and cultivate them for their sweet fruit.

Because date palm trees are dioecious (that is, either male or female), it is more efficient to pollinate female trees artificially than to rely on capricious natural agents like the wind or insects. The trees reach full productivity when they are 30 years old and only begin to decline after a century.

A single date palm produces up to 20 bunches of fruit—which is resistant to spoilage because of its high sugar content. The heart of the palm provides a celery-like vegetable, and the tree’s sweet sap is used to make fermented wine. Southern Mesopotamian date palm fronds were lashed together to form the walls of ancient huts.

During the second half of the second millennium B.C., workers from Deir-el-Medina (who constructed the royal tombs in Egypt’s Valley of the Kings) received dried dates as part of their wages. Dates were also cultivated in the mid-tenth century B.C. Sabaean kingdom, on the coast of modern Yemen, and sold to travelers following the incense route stretching from southern Arabia to Petra and Gaza.