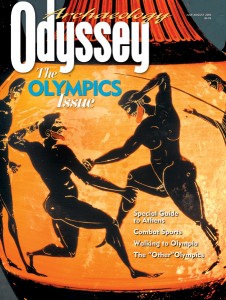 For months now, we have been enthusiastically putting together this special issue on the ancient Olympics—celebrating the return of the games to their country of origin: Greece.

The Olympic Games were held between 776 B.C. and 393 A.D. During this 1,200-year period, these competitions—along with other festivals at Delphi, Isthmia and Nemea—represented a human striving for perfection: Olympic champions demonstrated not only athletic skill but also the aesthetic ideal of controlled motion and strength bound by grace, and the moral ideal of a balanced, refined and disciplined character. To the ancient Greeks, these were the qualities that made Olympians pleasing to the gods and accounted for their victories.

But the Olympics had mysterious aspects, too, associated with darker regions of human existence. The Olympic festival, for instance, was also a religious-funerary ritual involving the sacrifice of 100 bulls to the god Zeus. The ancient sources are full of stories of the mutilation and death of athletes, which seem to have been a regular part of the Greek games. Moreover, the games were put to an end because the emperor Theodosius, who ruled the eastern empire from 379 to 395 A.D., thought them a threat to his Christian beliefs.