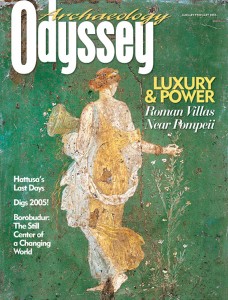 Lying in the shadow of Mount Vesuvius, or at least in the shadow of the eruption cloud of 79 A.D., only three miles south of Pompeii, is a little-known but spectacular archaeological site: the sea-edge villas of Stabiae.

Stabiae is home to a group of enormous villae marittimae, which are set on a cliff above the modern town of Castellammare di Stabia. We know 018of at least six of these villas, built directly next to one another—a sort of Roman high-rent resort district next to the small town of Stabiae. They were beautifully preserved by the eruption of 79 A.D., with standing walls, some of the highest quality frescoes surviving from antiquity and some of the most innovative garden architecture in the Roman world.

The villas all date between April 30, 89 B.C., and the eruption of Vesuvius on August 24, 79 A.D. On April 30, 89 B.C., the legate general Lucius Cornelius Sulla destroyed Stabiae as part of the so-called Social War, in which a group of Italian principalities revolted against Rome and—paradoxically—won full citizenship after being defeated. Pliny the Elder tells us that after the town was destroyed in the war, the area was redeveloped as a zone of luxury villas.1