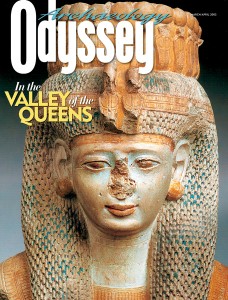 As we were putting together this issue, it occurred to me that all of the authors of the feature articles are women. I was surprised.

Heather Lee McCarthy, a Ph.D. student at New York University’s Institute of Fine Arts, reports on a revolutionary phenomenon in 14th-century B.C. Egypt, the building of elaborate tombs for women in the Valley of the Queens; folklorist Adrienne Mayor describes the use of chemical and biological weapons in antiquity; and independent scholar Elizabeth Rosen Stone discusses the fusion of Greek and Indian artistic styles in the monumental stone pillars raised by the great third-century B.C. Indian emperor Ashoka.

Interestingly, another article that we were forced to hold for reasons of space, on wooden furniture preserved from Pompeii and Herculaneum, was also written by a woman: Judith Harris, who for years has served as a kind of correspondent in Rome for Archaeology Odyssey.

Should I have been surprised? Out of curiosity, I checked the Editorial Advisory Board of our sister magazine, Biblical Archaeology Review, and found that of the 22 board members only one is a woman.