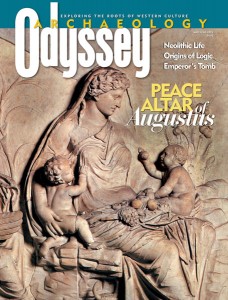 While searching for the origins of the mysterious Sea Peoples, the flamboyant British archaeologist James Mellaart found the world’s largest Stone Age city.

016 017 Late in the afternoon of November 10, 1958, a green Land Rover lurched down a narrow dirt road in south-central Turkey, about 30 miles southeast of the city of Konya. Three British archaeologists were packed inside. A frigid wind gusted from the south, blowing... END_OF_DOCUMENT_TOKEN_TO_BE_REPLACED

In 1993, after a 30-year hiatus, the Turkish government granted British archaeologist Ian Hodder a concession to excavate at Catalhoyuk—a project to which James Mellaart, the original excavator of the site, gave his blessings.

026 027 From Mellaart’s excavations, we know that the people who lived at Catalhoyuk harvested crops and domesticated animals. They lived in densely packed mudbrick houses, which were occupied for hundreds of years. They expressed themselves vividly in paintings and relief sculptures. But who were they,... END_OF_DOCUMENT_TOKEN_TO_BE_REPLACED

038 040 The exquisite Ara Pacis Augustae (Altar of Augustan Peace) stands on a busy Roman thoroughfare near the Tiber River. Carved on the walls enclosing the altar is an elegant relief showing, among other things, a procession led by the emperor Augustus (63 B.C.-14 A.D.)... END_OF_DOCUMENT_TOKEN_TO_BE_REPLACED

Past Perfect: Sailing with Odysseus