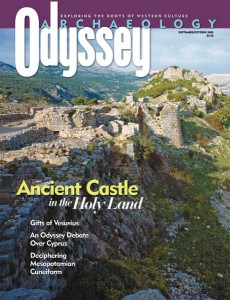 Nimrud Treasure to be Exhibited Outside Iraq

More than 300 objects from the ancient Assyrian capital of Kalhu (present-day Nimrud, in northern Iraq) will travel to Europe in late October 2005.

In 1988 Iraqi archaeologist Muzahim Muhmoud Hussein found the cache of necklaces, bracelets, diadems and a finely wrought crown—all made of gold and semiprecious stones—in four royal tombs lying beneath the palace of the Assyrian king Ashurnasirpal II (883–859 B.C.).

After the 1990 Gulf War, the treasure was kept in the vaults of Baghdad’s central bank. Coalition forces recovered the artifacts in June 2003 and moved them to Baghdad’s National Museum, where they were briefly put on display for the press.

The five-year-long traveling exhibit of the gold treasure from Nimrud is being organized by United Exhibits Group, a company based in Copenhagen, Denmark. The show will open in a European venue that has not yet been announced, and will continue on to North America and the Far East. Funds raised from fees and ticket sales will finance the refurbishment of Baghdad’s cash-strapped National Museum.