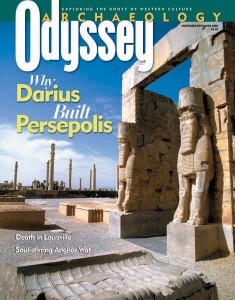 Putting together a “book”—shop talk for “magazine”—is not as simple as it sounds. Take, for instance, Ali Mousavi’s “Why Darius Built Persepolis”, one of the three features in this issue. The origins of the article trace all the way back to a paper delivered in 1997 at the annual meeting of the Archaeological Institute of America (AIA) in Chicago. According to the paper, the sixth-century B.C. citadel of Persepolis, in modern Iran, had largely been interpreted as a ritual city used for religious festivals; archaeological excavations conducted around the citadel, however, were uncovering residences and palaces, suggesting that Persepolis had in fact been a city where people lived and worked. This new interpretation of the site, I felt, would make for a wonderful article in Archaeology Odyssey.

In retrospect, the timing of the article is interesting. The first copies of the first issue of Archaeology Odyssey (Premiere Issue 1998), which printed the last week of December 1997, were sent to me in Chicago, where I was attending the AIA conference. In a sense, then, the article on Persepolis is exactly as old as the magazine in which it appears!

The scholar who delivered the paper in Chicago was eager to write for the fledgling Archaeology Odyssey, but the outside world intervened—in the form of personal problems and other commitments. In March 2000 the scholar wrote me a painful apology, “I have gotten so MIRED in the complexities of this topic that that I have been utterly paralyzed,” signing off, “All best (with a bag over my head).” Believe me, not all authors take their commitments so seriously.