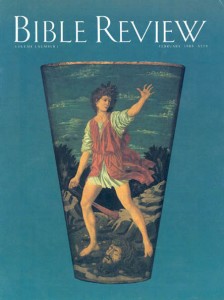 For over a thousand years, students of the Hebrew Bible have been intrigued by the fact that some words in the text occur only once. Medieval Jewish manuscripts mark these unique forms with the Hebrew letter lamed, an abbreviation for the Aramaic word layt, which means “there is no other.” The Masoretes, medieval scholars who sought to preserve and fix the text in its authentic form, made lists of such words, presumably for the benefit of scribes who might otherwise have thought the words wrong just because they were unique. Medieval Jewish interpreters of the Bible described words for which they could find no parallel as “one of a kind,” having no “friend,” “brother,” or even “father and mother.”

Modern scholars too have been impressed with such words in the Bible. They call them hapax legomena (singular, hapax legomenon, which means “once said” in Greek).1 The term was first used by pre-Christian Greeks to identify rare words in their own classic literature.

The most reliable way to determine the meaning of a Hebrew word, or one in any language for that matter, is from its contexts, seeing how it is used in different settings. Different contexts, however, are precisely what hapax legomena lack. Since each occurs only once, each has only one context from which its meaning can be inferred.