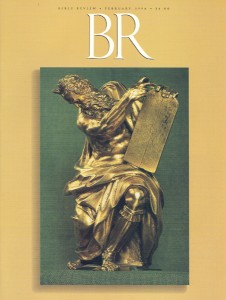 How should we imagine the Tablets of the Law that Moses twice brought down from the mountain?

Whether the story is legend or history is irrelevant to this question. However we, are to appreciate the story, we should try to understand these tablets in the context of their time.

In Cecil B. de Mille’s film “The Ten Commandments,” an arrow of fire circles and then strikes the rock beside Moses, searing ancient Hebrew letters into the stone. Then the fire gouges out the rock and cuts it into two slabs. Moses marches down the mountain, carrying the slabs in his hands, to relay God’s laws to the Israelites.

Even allowing for the fact that Moses remained fit and healthy until his death at 120 (see 050Deuteronomy 34:7), the image of him striding down a rough, steep mountainside with two slabs the size of paving-stones is rather ridiculous!

But de Mille was simply drawing on a long tradition of Christian art that shows Moses carrying large stones in his hands. These painters probably made the stones so large to provide enough space to write the Hebrew words legibly.