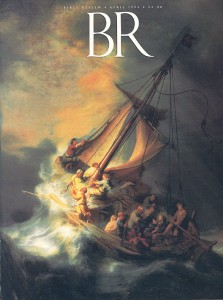 When I lecture about the historical Jesus, I am always asked. “What about Easter?”

The question implies two other questions. The first is “What happened?” How bodily or physical was Easter? Did something happen to the corpse of Jesus? Was the tomb empty? The second question is “How are we to understand the Easter stories?” Should we regard them as reports of events that could, in principle, have been recorded with a video-camera? If not, what then are they? Are they fabrications made up to legitimate early Christianity? Or is there another way of understanding them, neither as videocam accounts nor as fabrications?

To turn to the stories, the four canonical Gospels agree that, following Jesus’ crucifixion and burial, his tomb was found empty, and the Gospels of Matthew, Luke and John report that the risen Jesus appeared to some of his followers.1 The Gospels differ on details (who went to the tomb and what they saw), and Matthew, Luke and John each have their own distinctive appearance stories. How literally and “physically” are these texts to be understood?

A good starting point for thinking about this is a distinction between two notions that are often confused: resuscitation and resurrection. Resuscitation refers to the reanimation of a corpse: a person dead or thought to be dead comes back to life, resumes the life that she or he had before and will die again someday.2

Resurrection means something quite different in a first-century Jewish context, it does not refer to resumption of one’s previous life, but to entry into another kind of existence, a level or realm that is beyond death. Resuscitation intrinsically involves something happening to a corpse. Resurrection could, but need not, mean that the corpse had been affected; a corpse coming back to life is not the point.

Whatever happened at Easter, it was not resuscitation. Easter does not mean that Jesus resumed his previous life as a finite person, limited in time and space, and then died again someday. Rather, resurrection means that he entered another kind and level of existence, “raised to the right hand of God.”3

Granting the above, did something nevertheless happen to the corpse of Jesus? Was the tomb empty? The earliest New Testament writer, Paul, says nothing about it, which may or may not be significant. Paul; of course, refers to the resurrection—indeed, it is central for him—but he does not mention an empty tomb. Moreover, the first reference to the empty tomb is rather odd: Mark, writing around 70 C.E., tells us that some women found the tomb empty but told no one about it. Some scholars think this indicates that the story of the empty tomb is a late development and that the way Mark tells it explains why it was not widely (or previously) known.4

The story of the empty tomb has been considered from another angle as well. In his new book, John Dominic Crossan provocatively raises a prior question: Was there ever a full tomb? That is, was Jesus buried in a tomb at all? This question is based on the fact that the Romans, as an ultimate humiliation, usually denied burial to victims of crucifixion. Crossan suggests that Jesus’ body may have been devoured by dogs or buried in a common grave.5

The suggestion that there may not have been an empty tomb, or that nothing unusual may have happened to the corpse of Jesus, sometimes strikes people as destructive of the truth of Easter. It is, if one thinks that Easter is about resuscitation. But it is not threatening if one thinks of Easter as resurrection, which need not involve anything happening to a corpse.

I mention our uncertainty about whether something happened to the corpse of Jesus not in order to create uncertainty about Easter, but to highlight Easter’s central claim and meaning: The followers of Jesus continued to experience him as a living reality after his death, but in a radically new way. This is the uniform testimony of the early Christian movement; for them, Jesus was not simply a physical figure of the past, but a spiritual reality in the present.

What about the reports of his appearances? Paul provides the earliest (and only “firsthand”) reports. Paul’s experience of the risen Christ seems to have been visionary, according to his own words, as well as Luke’s threefold report of Paul’s Damascus road vision in Acts.6 It is striking that Paul explicitly and insistently denies that the resurrection body is physical; rather, it is spiritual (1 Corinthians 15:12–57). Note that Paul insists on the actuality of resurrection (verses 12–19), and then emphasizes that it is a spiritual body, not the physical body, that is raised (verses 35–50). Thus Paul affirms a “bodily” resurrection, even as he denies that it is physical.

They portray the risen Christ in quite different ways. Sometimes he is pictured as physical (he cooks breakfast, eats a bite of fish, asks to be touched), sometimes as nonphysical and mysterious (he passes through walls, sometimes suddenly vanishes, and he is capable of being present without being recognized). How should we understand these stories?

My favorite story for illustrating this is the encounter on the road to Emmaus (Luke 24:13–35). Two disciples journey with stranger. They do not recognize him, though they talk for hours. At nightfall, they invite him to join them for supper, he breaks the bread, they recognize him as the risen Christ, and he vanishes.

Could you have captured this on video? I think not. Yet it speaks powerfully of journeying with the risen Christ as the mysterious stranger in our midst. Crossan, whose views about the body of Jesus were mentioned earlier, puts it well. Noting that the Emmaus road story brings together, in one metaphoric afternoon, several decades of early Christian experience, he writes, “Emmaus never happens. Emmaus always happens.”8

Speaking as a Christian, I regard these stories not as straightforward events that you could capture on video. Rather, using the language of time and space, they seek to express something on the edge of the ineffable, namely, the mystery of Christ’s continuing presence in the lives of Christian as both companion and lord.

Marcus J. Borg (d. 2015) held the Hundere Chair in Religion and Culture in the Philosophy Department at Oregon State University. He was the author of many books, including the bestselling Meeting Jesus Again for the First Time (Harper San Francisco, 1994).