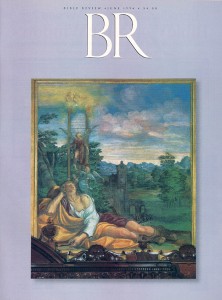 Moving Out, Moving In and Moving Up

With this issue, we say farewell to the two talented scholars who have made BR’s Bible Books column a lively forum for discussion of the latest in Bible scholarship: James VanderKam, professor of Old Testament at Notre Dame University, and Elizabeth Johnson, associate professor of New Testament, New Brunswick Theological Seminary. The two were named BR’s book review editors in June 1992 and they have turned what was then a minor column—often with only one or two reviews per issue—into one of the magazine’s prize features.

Happily, their departure is balanced by the arrival of two distinguished scholars who we hope will take the book review section even further: Ronald Hendel, associate professor in the Department of Religious Studies at Southern Methodist University, Dallas, Texas; and Anthony J. Saldarini, professor in the Department of Theology at Boston College.

The author of The Epic of the Patriarch: The Jacob Cycle and the Narrative Traditions of Canaan and Israel (Scholars Press, 1987) and former excavator at the Tel Lachish Archaeological Project in Israel, Hendel received his Ph.D. from Harvard in 1985. For BR, he is the author of “When the Sons of God Cavorted with the Daughters of Men,” BR 03:02.