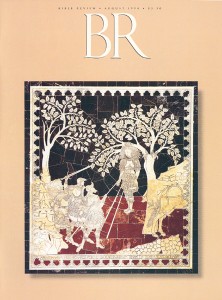 Switching channels the other night, I came across the Christian Broadcasting Network during a fundraising campaign. CBN founder and former presidential candidate Pat Robertson was speaking earnestly about signs that Jesus may return soon, perhaps by the year 2007.1

Robertson is not alone in thinking that the second coming of Christ may be near. In the 1980s, the best-selling non-fiction author in the English-speaking world was Hal Lindsey. His many books, with titles like The Late Great Planet Earth, Countdown to Armageddon and Theres a New World Coming, all trumpet the same theme: Biblical prophecies about the return of Christ and the end of the world may be coming to pass in our generation.2 The approach of the year 2000 is likely to increase the sense of expectation.

As I listened to Robertson, I thought about how differently mainline biblical scholars view this matter. We do not see the New Testament as speaking about the second coming of Christ in our time or at any future time.

Why not? The primary reason is the way we see the New Testament: as a collection of first-century documents produced by first-century authors writing for the first-century Christian communities. Rather than seeing these texts as referring to events of our time, or of any future time, we see them as telling us about the past: They tell us what people in the emerging Christian movement believed.