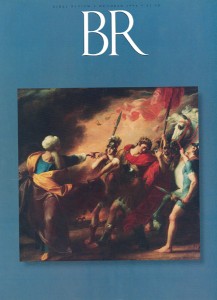 About Paul’s missionary journeys to the west much has been written. But almost nothing has been said of his trip to Arabia. No wonder; it is barely mentioned, almost as an aside, in Galatians 1:17: “I went away into Arabia, and again I returned to Damascus.”

Few commentators who attempt to locate “Arabia” have justified their choice of location (one suggested the Kingdom of Nabatea, which was not created until 106 A.D.), and no one, to the best of my knowledge, has attempted an explanation of what happened there.

Where was Arabia? The Greek geographer Strabo (c. 64 B.C.—after 23 A.D.) defines Arabia Felix to include the entire Arabian peninsula bounded by the Red Sea and the Persian Gulf. But what would the term “Arabia” have suggested to a Jew who lived in first-century Judea?

The first-century Jewish historian Josephus provides a very precise answer: Arabia could be seen to the east from a tower in Jerusalem. More specifically, it was contiguous to Herodian territory running along the southern border of the Roman province of Syria. Petra was the royal seat of Arabia, hence the name “Arabia Petrea,” or “Arabia belonging to Petra.” This mountain-encircled city, however, was the capital and chief city of the Nabateans, hence another name, “Arabia of the Nabateans.”