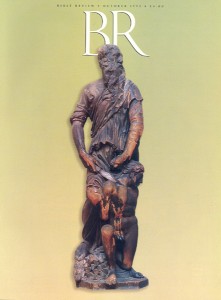 Jew and Gentile in the Ancient World: Attitudes and Interactions from Alexander to Justinian

How did the Jews of antiquity avoid assimilation? That question has motivated 35 years of study by Louis H. Feldman, professor of classics at Yeshiva University. In this lengthy volume, Feldman adduces material from Josephus and Philo, Apocrypha and Pseudepigrapha,Talmud and Midrash, imperial legislation and ecclesiastical pronouncements, papyrus collections and archaeological finds to answer his career-long question.

His response is simple: Judaism was secure and vigorous in its orthodoxy. Its numerous attractions—its ethics, wisdom, the courage of its heroes, the reputation of Moses—kept insiders spiritually and intellectually content and motivated those outside to become sympathizers as well as converts. What a contrast to the lachrymose histories of Judaism.

Alas, overdrawn conclusions, an ahistorical use of sources, a lack of theoretical models and a numbing style consistently undermine Feldman’s impressive research.