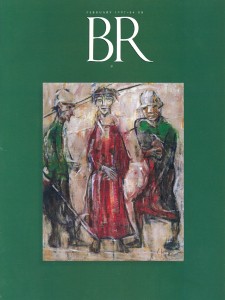 The practice of public reading from the Bible according to a lectionary, which goes back to the biblical periods of Judaism and Christianity, usually presupposes that in some sense God speaks today to a congregation through the literature they regard as sacred scripture.a

However, a system of lectionary readings, even when extended over a three-year period or longer, does not include everything found in the Bible. How are the readings selected?

This question has puzzled me as I have worked on a project to help preachers interpret the assigned texts for the day. Apparently the major principle of selectivity in use, at least in Christian lectionaries, is the progression of the seasons of the liturgical calendar (Pentecost, Advent, etc.). But even when the sacred calendar is followed one wonders why some texts are chosen and others bypassed.

Today many people think that religious congregations should be more critical in scripture selection. Many passages in the Bible—and here I speak of both the Jewish Bible (Tanakh) and the Christian (Old and New Testaments)—when taken at their face value could support, and have supported, slavery, the forcible taking of land from native populations, the subordination of women, and the mobilization of a coalition for a particular political cause or national goal.