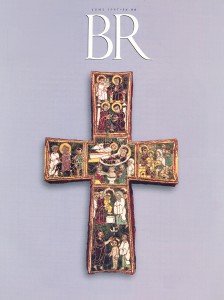 I am your son,” the pharaoh says to the Egyptian sun god Re in an Old Kingdom pyramid text (c. 2300 B.C.).1 From an early period, Egyptian pharaohs were regarded as divine, the offspring of gods. Did this influence Hebrew understanding of kingship? And did it, either directly or indirectly, through Hebrew mediation, affect Christian understanding of Jesus of Nazareth as the son of God?

In almost every royal inscription from ancient Egypt, the pharaoh is called “the son of Re,” the sun god. Re was the preeminent deity in the Egyptian pantheon through most of the three millennia of pharaonic history.

Beginning in the early second millennium B.C., pharaohs had five names. The last, called the nomen, was the birth name. The second to last, called the prenomen, almost always contained the name of the sun god Re. These last two names were the only ones used in the oval figure, called the cartouche, that officially identified the king.