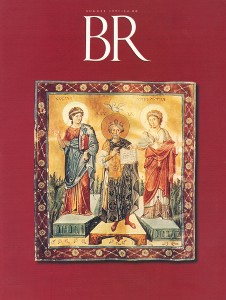 It was raining when we reached Leningrad (now St. Petersburg) on a small cruise ship that made a regular run through the North Sea between Leningrad and the Scandinavian countries. The Soviet Union was still intact in May 1990; it was the glasnost era.

Our luggage, all 52 pieces of it, was loaded on a small school bus sent by the Russian National Library. For some reason we never understood, customs could not inspect our boxes and equipment that day, but we didn’t find that out until we had sat on the bus, in the rain, for several hours. However, we were allowed to take everything to the library as long as we didn’t actually use it.

The library has a firm rule—you can take nothing with you past the front desk except a pad of paper and a pen: no briefcases, backpacks or even purses. That rule was enforced to the letter on our first day. After a while, however, the guards got so used to us that all we had to do was point to our shoulder bags and briefcases, murmur “photographia” and walk on through.

In the center of the room where we did the photography was a tall, arched gallery. Underneath the gallery was a large conference table and a tall column mounted with a bust of Lenin. You might say that Lenin oversaw all that we did, which added a delightful touch of irony to our work.