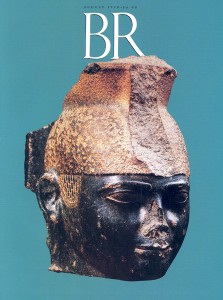 When Samson was in utero, an angel warned his mother not to drink alcohol. The problem was not fetal alcohol syndrome, but rather that Samson was destined to be a Nazirite, an Israelite man or woman who took a special vow of ritual purity (Numbers 6:1–21; Amos 2:11–12).

“You are going to conceive and bear a son,” the angel told Samson’s mother. “Do not drink wine or strong drink, and do not eat anything impure, for the boy is to be a Nazirite to God from the womb to the day of his death!” (1 Samuel 13:4, 7, 14).

Like the high priest, the Nazirite was supposed to avoid contact with corpses. Further, while the priest was forbidden to enter the divine presence inebriated (Leviticus 10:8–9), the Nazirite was to avoid fermented beverages at all times, even any grape product such as vinegar or raisins. In token of his special status, the Nazirite was expected to grow his hair long. “No razor,” the Book of Numbers dictates, “shall touch his head” (Numbers 6:5).

Two Nazirites appear in the biblical narrative: Samson and Samuel.