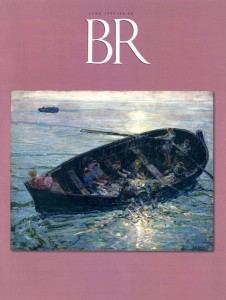 A First for the Last Supper

Leonardo da Vinci got it all wrong—at least according to BASIC, Brothers and Sisters in Christ, a Roman Catholic group in Ireland that supports the ordination of women as priests.

BASIC faults Leonardo for depicting only males in his Last Supper. The group’s Web site (www.iol.ie/~duacon/basic.htm) says key details of the painting are off base: Daylight streams through a window, but the Last Supper took place at night; the figures are seated around a table, but Jesus and the disciples would have reclined on couches; the painting shows a meal of fish and ordinary bread, but the supper was a Passover meal of unleavened bread, roast lamb and bitter herbs.

But the group finds greatest fault in what da Vinci left out altogether: women and children. A Passover meal, it notes, had to be eaten by the entire family; children are especially important because they must ask questions so that their parents can teach them the meaning of the holiday.

To counter Leonardo’s presentation, BASIC commissioned Polish artist Bohdan Piasecki to execute a Last Supper that was more historically correct, in its opinion. The result, viewable on the Web site, shows 22 figures, including seven women and two children, dressed in Palestinian garb and partaking of Passover food.