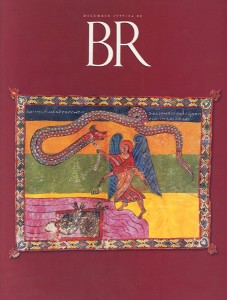 The biblical roots of millennialism

January 1, 2000…The biggest birthday any of us will ever live through,” trumpeted the New York Times in announcing the Millennium Series in its Sunday magazine. Newspapers predict that as many as 1.5 million people will crowd Times Square at midnight, December 31, 1999, watched by an estimated television audience... END_OF_DOCUMENT_TOKEN_TO_BE_REPLACED

Can We Find God Without History?

The story of one scholar’s failed attempt

How can we discover—or uncover—the Israelite God in the text of the Hebrew Bible? That is the problem scholars refer to as Old Testament theology. A recent book that has created quite a stir in the academy, written by the prominent Old Testament theologian Walter Brueggemann, answers the question in... END_OF_DOCUMENT_TOKEN_TO_BE_REPLACED

And the Band Played On…But What Did They Play On?

Identifying the instruments in Nebuchadenezzar’s orchestra

The text itself is music. Like a refrain, the litany of instruments is repeated four times in chapter 3 of the Book of Daniel: “the cornet, flute, harp, sackbut, psaltery, and dulcimer, and all kinds of musick.” Like an insistent ostinato, the names Shadrach, Meshach and Abed-Nego—the three young Hebrew... END_OF_DOCUMENT_TOKEN_TO_BE_REPLACED

A Return to Origins (Again)