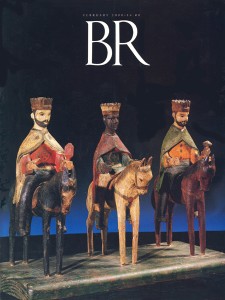 If the gospel writers were drawing on Old Testament references to Bethlehem to bolster Jesus’ identification as the Messiah, they certainly had plenty of passages to choose from. Bethlehem (the name means “House of Bread”) appears almost 50 times in more than ten books of the Hebrew Bible.

The city, just 5 miles south of Jerusalem, is first mentioned in conjunction with the death of the matriarch Rachel. “So Rachel died, and she was buried on the way to Ephrath (that is, Bethlehem)” (Genesis 35:19, 48:7).a

More important to our story, Bethlehem is also where Ruth and Boaz meet, marry and bear their son Obed, the father of Jesse, the father of King David. God sends the prophet Samuel to Bethlehem to find the new king, saying, “I will send you to Jesse the Bethlehemite, for I have provided myself a king among his sons” (1 Samuel 16:1). Bethlehem remained a city of significance throughout the stories of David’s life and reign; while fighting the Philistines, who had a garrison at Bethlehem, David requests water from the well of Bethlehem (2 Samuel 23:15).

And there’s more. The Book of Micah, written around the time of the Assyrian siege of Samaria in the late eighth century B.C., looks forward to a new day when Israel will be led by a ruler from Bethlehem (perhaps a ruler “from David’s line”):

But you Bethlehem of Ephrathah,

the least of the clans of Judah,

from you will come for me

a future ruler of Israel