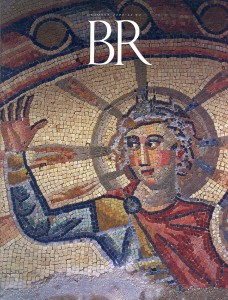 The delicate carving on the side of the sarcophagus depicts Zeus, in the guise of a swan, graphically forcing himself on the Spartan queen Leda. The scene is one of the best known in ancient Greek mythology, so its appearance on a sarcophagus should be no surprise. This particular sarcophagus, however, comes not from ancient Greece or Rome, but from the vast Jewish burial chambers at Beth She’arim, in Lower Galilee. Numerous rabbis and their relatives were buried here in the third and fourth centuries C.E. Even Rabbi Judah the Prince, the compiler of the great Jewish code of law, the Mishnah, is interred here. What is such a blatantly sexual image, featuring the head of the pagan pantheon, doing in this Jewish cemetery?

A closer look at the sarcophagus tells a second story: The images of Leda and the swan were intentionally damaged in late antiquity. Apparently a visitor to Beth She’arim could no longer bear the presence of this three-dimensional pagan image and took a hammer to it. The sarcophagus was then turned against the wall so that the offensive image all but disappeared.

The relief depicting Leda and the swan was not alone in its fate. Between the late seventh and ninth centuries C.E., a wave of iconoclasm swept across Palestine. Synagogue mosaics, which previously had often been rich in representations of people, mythic figures and animals, were frequently defaced.