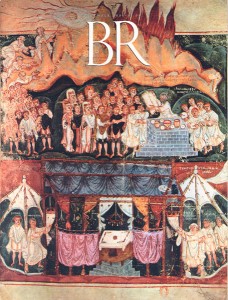 Of all the detailed instructions given by Yahweh for the building of his Tabernacle, perhaps none is more puzzling than the one found in Exodus 26:14: “And for the tent you will make a cover of rams’ skins dyed red, and over that a cover of ‘.” The first part of the verse is straightforward enough, as is the Hebrew word ‘, which refers to the skin, or hide, of an animal. But, as even a small sampling of English Bible translations illustrates, the obscure word is another matter. In the King James Version, for example, the phrase ’ is translated “badgers’ skins”; but the same phrase has been variously rendered as “porpoise skins” (New American Standard Bible), “goatskins” (Revised Standard Version), “fine leather” (New Jerusalem Bible), and “dugong-hides” (Revised English Bible; a dugong is a sea cow). So much for scholarly consensus!

Interpreters of the Hebrew Bible have tended to agree that the word designates some kind of animal, but they have obviously differed widely with respect to their choice of species. Some, including the renowned second-century C.E. Jewish scholar Rabbi Meir, have even maintained that refers to a legendary creature with a brightly colored pelt—a tradition that may be reflected in both the Septuagint and the Vulgate, which translate ‘ into the Greek and Latin equivalents of “hyacinth-colored leather.”1