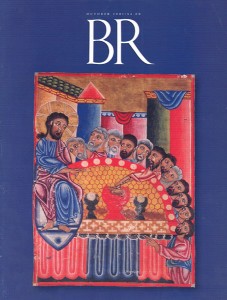 A seductive woman, whose heart is “a snare” and whose legs “work wickedness,” is portrayed in a well-preserved poem found among the Dead Sea Scrolls at Qumran. The popular title for the poem (quoted in full in the sidebar to this article) is simply “The Seductress”; scholars refer to the text as 4Q184 because it is the 184th fragment from Qumran’s cave 4.1 Although the Qumran scroll fragment dates to the first century B.C.E., the poem itself is probably much older.

The unnamed protagonist of the poem is usually identified as a harlot, a common prostitute who leads men to sin. Because the Qumran community was an isolated sect in the Judean desert wilderness, where there was little fear of encountering an urban streetwalker, most scholars interpret the poem as an allegory. The false woman of the poem, they suggest, represents the false teachings of a rival sect. Others have proposed that she symbolizes the tantalizing evils of Rome or that she represents an individual antagonist whose identity we can no longer determine.

Some have compared the Qumran seductress to the allegorical “strange woman” of the Book of Proverbs 2:16 and 5:3. This treacherous woman, whose lips “drip honey” and whose mouth is “smoother than oil,” is a metaphor for sin.