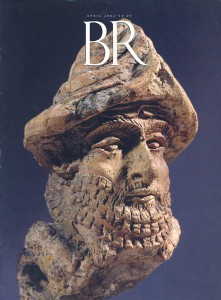 The Hebrew prophet scholars call Second Isaiah loved to make fun of idols. He scathingly mocks them in as powerful a parody as anything in the Bible. But does he really understand the idols he condemns? I grant the literary artistry and effective polemic of this prophet, who is believed to have written the second section of the Book of Isaiah (chapters 40–55) in about 540 B.C.E., while exiled in Babylon. But would an Assyrian or Babylonian worshiper give us a different, perhaps more favorable, not to say evenhanded, picture?

“To whom then will you liken God?” the prophet asks. “An idol?” (Isaiah 40:18–19). In the following chapters, Second Isaiah ridicules both idols and the deluded men who think they can fashion gods out of wood and metal (see sidebar to this article). For Isaiah, these “deities” produced by human hands are as powerless and corruptible as the materials from which they are constructed.

For it is the work of a craftsman’s hands.

He cuts down a tree in the forest with an ax,

He adorns it with silver and gold,

He fastens it with nails and hammer,

So that it does not totter.