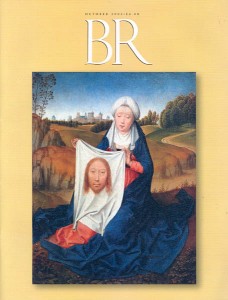 How did a man from Nazareth come to be hailed as divine? This question lies at the heart of the latest book by Geza Vermes, professor emeritus of Jewish studies at Oxford University. In his earlier works, Jesus the Jew (1973), Jesus and the World of Judaism (1983) and The Religion of Jesus the Jew (1993), Vermes focused on situating Jesus within his vibrant Jewish culture. This time, the eminent translator of the Dead Sea Scrolls and authority on postbiblical and rabbinic Judaism turns directly to the New Testament.

But unlike most biographers of the historical Jesus, who invariably begin with a discussion of the early portraits of Jesus found in the Gospel of Mark and the so-called Q source,a Vermes turns immediately to the most elevated depiction of Jesus in Christian scripture—the Gospel of John. Chapter by chapter, he strips away later theological layers to reveal the same Jesus familiar from his earlier studies: an entirely human, entirely Jewish, “unmarried, thirtyish, small-town tekton, carpenter or builder.” At the same time, he demonstrates how the evangelists and Paul contributed to the development of Christian thought.

Vermes’s Jesus is no Hellenized, Greek-speaking Cynic-sage, as other scholars have suggested. Nor is his Galilee a fully Hellenized environment, but rather a place rife with fervent Jewish nationalism—and home to the occasional Jewish wonder-worker. His Jesus stands in the long line of biblical prophets with their concern for social justice and their artistry at teaching by story and example.