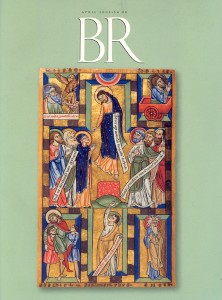 Enoch is not the only figure in the Hebrew Bible to be taken up to heaven while still alive. The prophet Elijah, too, makes a spectacular ascent. As recorded in the Book of Kings, Elijah is walking along the Jordan River with his disciple and spiritual successor, Elisha, when suddenly, “a fiery chariot with fiery horses appeared and separated one from the other; and Elijah went up to heaven in a whirlwind” (2 Kings 2:11). In the illumination on the cover of this issue, Elijah appears at upper right, ascending to heaven in a wagon-like chariot.

Elijah’s dramatic departure, like Enoch’s before him, inspired the belief that God must have special plans for Elijah. The later prophet Malachi suggested that God had further work for Elijah on earth. In Malachi 3:24 (4:5 in the Christian Old Testament) we read: “Lo, I will send the prophet Elijah to you before the coming of the awesome fearful day of the Lord.” In later Jewish tradition, Elijah is expected to return as the forerunner of the Messiah. An extrabiblical Hebrew Apocalypse of Elijah describes his role as a seer prophesying events of the end-time. And at the Passover Seder, an extra cup of wine—Elijah’s Cup—is always placed on the table in anticipation of his return.