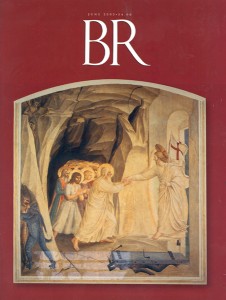 In the fresco by the Florentine Renaissance painter Fra Angelico (c. 1395–1455) that appears on the cover of this issue (and above), Jesus (numbered 1 in the diagram) liberates an onrushing crowd of righteous from Limbo—recalling the tradition preserved in the 13th-century devotional book, the Meditations on the Life of Christ by St. Bonaventure, in which the just “joyfully hastened to meet Him.” First rescued is Adam (2), who is followed by Moses (3) with rays of light streaming from his forehead, John the Baptist (4), whose hair shirt has grown white with age, Abel (5) with a bloodied head, and a crowned King David (6). Satan (7) is depicted crushed beneath the door of Hell, which has been knocked from its hinges by an earthquake that cracked the cave floor. (One hinge remains in the wall, and bent hinge nails lie on the door.) On the left, Hell’s other demons (8) cower in crevices, trying to escape Christ’s presence. The white stone and the sliver of blue sky barely visible through the doorway stand in contrast with the dark, cavernous background of Hell.