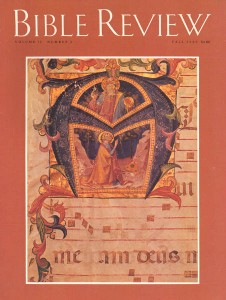 Of all the books of the Bible in which poetry plays a role, Psalms is the one set of texts whose poetic status has been most strongly felt throughout the generations—regardless of the vagaries of translation, typographical arrangement of verses or notions about biblical literary form.

This unwavering perception that the psalms are formal poems—even in ages, for example, when most readers imagined that the prophets spoke nothing but emphatic figurative prose—was no doubt reinforced by the musical indications in the texts themselves. Many of the psalms are explicitly presented, in introductory notes, as liturgical songs to be intoned to the accompaniment of the lyre, the ten-stringed instrument, cymbals, drums or whatever else was once used to fill the temple courts with melody and rhythm.

The name of the book in Western languages, from the Greek psalmos, a song sung to a plucked instrument, stresses this musical character, as does the full Hebrew title mizmorei tehillim, “songs of praise.”

It is symptomatic of the general response to these poems that so many poets in Renaissance England, though ignorant both of Hebrew and of an understanding of biblical poetic structure, tried their hand at producing metrical English versions of Psalms. In whatever way biblical versification was thought to work, it was almost universally assumed that the psalms exhibited the rhythmic regularity, the symmetries, the cadenced repetitions, of artful poems.