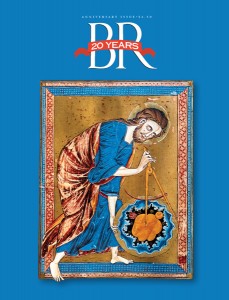 012013 If Bible Review were a male Israelite, today it would leave adolescence behind and officially become an adult. That’s because with this issue, Bible Review turns 20—a significant milestone in the Bible. Twenty may well be the most overlooked number in the Good Book, however... END_OF_DOCUMENT_TOKEN_TO_BE_REPLACED

015 To help us celebrate 20 years of BR, we asked the famous, beloved nun and art critic Sister Wendy to write about 20 of her favorite biblical (or Bible-inspired) paintings that have appeared in our pages over the years. Enjoy!—Eds. Biblical scholars may raise a pitying eyebrow,... END_OF_DOCUMENT_TOKEN_TO_BE_REPLACED

The Genesis of Genesis

Is the Creation Story Babylonian?

037 On December 3, 1872, George Smith, a former bank-note engraver turned Assyriologist, stunned the Western world by announcing that he had discovered a Babylonian story of a great Flood resembling the well-known account of the Deluge in the Book of Genesis. Four years later, Smith published a... END_OF_DOCUMENT_TOKEN_TO_BE_REPLACED

Twenty Years That Have Passed