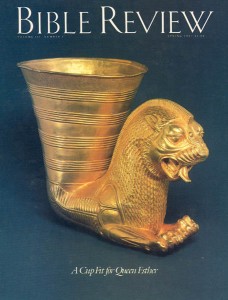 The cookery of the Bible is a subject that intrigues food historians, anthropologists and even ordinary cooks. By figuring out the roots of biblical cuisine, we can all better understand where our cuisine began.

Hunting and gathering societies of the ancient Middle East subsisted on berries, grains, insects and other foods found in the woods, fields and desert. The everyday diet of these nomads was rather sparse: bird’s eggs, yogurt, sheep or goat milk, wild-bee honey, wine, olive oil, lentils, fresh or dried dates and figs, pomegranates, wild melons, cucumbers, sesame seeds, garlic, onions and grain from barley and wheat, The nomads ate most of these foods as they found them. Some foods, such as oil, were pressed, and others, such as yogurt, were fermented. Only occasionally was a wild animal killed as a dietary supplement.

In ancient Palestine, the first grain planted and harvested or the felling of an, animal large enough to feed many people provided an occasion for jubilation and festivity among both Jews and gentiles. Both peoples offered sacrifices to God—sometimes in gratitude, sometimes in fear, and sometimes as an expression of penance for sin.