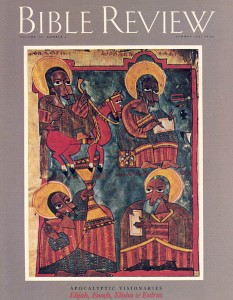 In “When the Sons of God Cavorted With the Daughters of Men,” Ronald S. Hendel focuses on a story that has scandalized Bible readers for millennia. How did it get there? What does it mean, this seemingly polytheistic tale of earthly women and fallen angels? In a sometimes breathtaking analysis, Hendel explains how strains from earlier Canaanite and Babylonian stories have been transformed in the Bible to teach moral lessons and to explain humankind’s mortality.

A former excavator at Tel Lachish Archaeological Project in Israel, Hendel is assistant professor of religious studies at Southern Methodist University. In 1985, his paper, “Parallel Themes in the Ugaritic Epic Poems and the Hebrew Bible,” won the Mitchell Dahood Memorial Prize in Biblical Hebrew and Northwest Semitic.

The strange story of the sons of God and the daughters of men is carried forward in the apocalyptic book of Enoch, which was considered scriptural by several New Testament writers. Unknown to modern scholars until its rediscovery in the 19th century, the Book of Enoch caused a sensation when it first appeared in English in 1821. Themes of the Last Judgment, resurrection, and the world beyond, inspired poets and, artists and gave scholars grist for years of study.