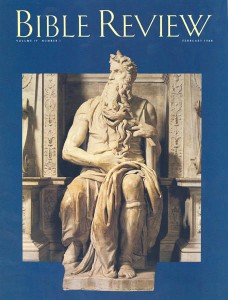 Michelangelo’s monumental Moses immediately captures the attention of visitors to the church of St. Peter in Chains in Rome. The sculptor has created a vision not merely of the lawgiver, but of Israel’s God as conceived by pre-modern Christendom. The unforgiving stare and the taut, sinewy arms leave no doubt that the subject is prepared to enforce the harsh strictures of the law still unmitigated, as it were, by Christian love. One further feature contributes to the sculpture’s faintly sinister aspect: the artist has placed a pair of irregular, knobby horns atop Moses’ head.

The knowledgeable tourist is not particularly surprised by these growths. He is aware that, even to the present day, Jews have been widely believed to be horned; he may therefore see Moses’ horns as a reflection of Michelangelo’s, or Christendom’s, anti-Semitism.

Frequently, however, the student of art is told that Moses’ horns originate not in European bigotry, but in an old misunderstanding of a biblical passage whose meaning is now known. The artistic motif of Moses’ horns is the result of no mere “misunderstanding,” however; it arises out of an ancient debate, still unsettled, over the meaning of a single Hebrew word.

The verb occurs in only one passage in the Hebrew Bible, in Exodus 34:29–35, which describes the aftermath of Moses’ vision of God’s glory: